Independent open source developers cannot profit from their work directly today. Sponsorships and donations are commendable, but they rarely provide enough income to pay the bills, much less an income comparable to industry salaries.1 What’s missing is a business model that lets independent developers capture a portion of the value they create.

A new business model must carefully balance the interests of open source developers, their users and the companies that employ them. It must not change open source workflows, it should not change how open source software is adopted and it should primarily burden those who derive the most value from the project. Sponsorships and donations satisfy the first two conditions, but as apparent, altruistic systems don’t work at internet scale and the voluntary nature of these expenses means that corporations must not only be willing to take on the expenses, but also the additional bureaucracy involved in approving voluntary spending. This is in addition to the extensive self-promotion efforts required from open source developers to gain patrons.

Out of these, the dual-licensing and pay-for-source models are the least promising in my opinion. With dual-licensing, users are unsure what constitutes experimentation and what is commercial use, open source adoption is suddenly a sales process and the dual-license creates a legal risk for companies that further hinders adoption. I believe the fact that VC-funded open source startups prefer SaaS or open-core models to dual-licensing is proof enough that it is not a promising avenue for individual developers.2

The second model, pay-for-source, was most recently experimented with by a startup called GitRoyalty. They implemented a model where parts of the repository are stored in a private submodule and users are charged for access to this submodule. Two months after launch, it seems that the model hasn’t been successful unfortunately.3 I believe that they have introduced too much friction and in the wrong places: GitRoyalty makes open source maintainer’s jobs harder and discourages new contributors, while also hindering adoption and creating bureaucracy and uncertainty for users.

The third model, paid support services facilitated by platforms, can work, but I believe this to be a last resort for most developers. Nobody gets into open source to become a corporate support engineer. Not to mention that this model has the undesirable effect of moving leverage from open source creators to the facilitating platform, as the platform owns the customer relationships while support staff is replaceable.

Finally, the ad model was most recently experimented with in a short-lived, but enlightening experiment by Feross Aboukhadijeh. Feross put a spin on the traditional model of displaying advertisement on websites and built an NPM module that displayed a sponsored message when added as a dependency. While open source developers generally welcomed the experiment, there was a backlash from users that made the advertiser pull out from the project quickly.

I believe Feross’ experiment was a step in the right direction, but it needs to be driven further. Ad supported independent online publishers have been struggling for a long time now, but those that introduced subscription models, thrive.4 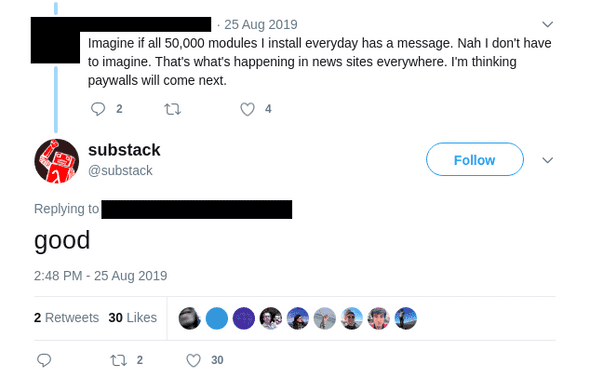 Yes, the new business model I propose here is a paywall for documentation sites, where daily users have to log in and pay a monthly subscription fee to access the site. Teams pay a fixed subscription price per seat and individual users pay a variable price with an option to pay $0. Authentication, subscription management and payouts are provided by a forkable company called Dokknet. The paywall integrates with existing documentation frameworks on the front end and integrates with hosting providers on the back end.5 Dokknet charges 3% of revenues + Stripe fees with the long term goal of providing the services at a flat 1% fee (including payment processing charges).

Why is this a good idea?

Because the paywall lets open source developers get paid for simply writing great software and documentation and it makes it easy for companies to pay for their work. Teams can sign up for a subscription with a credit card like they do for all other developer tools. And it doesn’t interfere with how open source software is built or adopted.

What can go wrong?

Well, most paywalls suck. But they don’t have to! The goal is not to block access, but to impose a slight convenience tax on daily users while making the experience as ergonomic as possible. This can be achieved with generous unauthenticated views, a single login for all documentation sites behind a paywall, and an unobtrusive design that integrates with the documentation framework used by the project. For those projects that are currently supported by donations or sponsorships, patrons should be given paywall access. This can be easily achieved by white-listing certain emails for the project.

What problem does it not solve?

Why you should support this

The gist of it is that if you as a developer regularly finish your day with 10+ tabs open into a doc site and you make money from it, you or your employer should pay for it. This will create a world where developers of successful open source projects can quit their jobs and earn a dependable income in proportion to the success of their project. Users of open source software benefit as well, because the paywall will directly lead to better documentation, and the existence of a successful business model will result in more and better open source software in the long run.